Copel bases its sustainability strategy on the principles and guidelines set forth in the Sustainability Policy, in the guiding values of the Company’s Code of Conduct, in the Strategic Reference, in the Strategic Planning, in the Materiality process, in the public interest that justified its creation and in the voluntary commitments undertaken, especially: the Principles of the Global Compact and the Sustainable Development Goals – SDGs of the UN’s Agenda 2030.

This strategy aims to guide the conduct of processes, programs, and initiatives that can contribute directly and indirectly to the promotion of a culture of sustainability and the generation of shared value, making the ESG debate systemic and broad, reinforcing the commitment to sustainable development and ensuring the continuity of the Company.

The Company stimulates research, development and innovation, seeking solutions that contemplate the adaptation to climate change and the reduction of emissions in the operation and expansion of its business.

To grow in a sustainable way and aligned with discussions about the challenges related to climate change, Copel has increased investments in alternative sources of energy generation.

In 1999, the Company pioneered the study of wind power to generate electricity in Brazil; in 2011, it approved the Copel Climate Change Agenda; and the Corporate Policy on Climate Change has been in effect since 2016.

Copel plans to be 100% renewable by 2030, which is why it is studying divestment in the thermoelectric plants in which it has an equity stake, in addition to expanding investments in wind and solar farms, as it has already done in the last three years.

Copel’s Carbon Neutrality Plan aims, by 2030, to neutralize the Greenhouse Gas (GHG) emissions for the assets over which Copel has operational control, through the reduction and compensation of residual emissions.

Considering that Copel is committed to establishing goals to significantly reduce GHG emissions so that its actions will allow it to reach a maximum of 1.5°C increase in global temperature, goals have been defined for the businesses in which the Company operates, as well as its interconnected processes. These goals were established adopting the precepts of SBTi (Science-Based Targets), which correspond to the practices to be adopted by companies that are engaged in Net Zero commitments. The main goals are related to the decarbonization of the generation matrix, fleet, land use change, and SF6.

In addition, Copel invests in research for new energy sources that can generate carbon credits, both for the additionality of the project and for the environmental impact, especially those that are linked to biomass or waste – because they contribute to the reduction of methane emissions – and with this added value can stimulate the knowledge of the technology since many times they are not financially viable, but for the carbon credits they are justified.

Conscious consumption is part of Copel’s daily routine. Therefore, in 2014, the Eco-efficiency Program was created, with actions to combat the waste of energy, water, fuel and paper, in addition to reducing waste.

The actions of the Eco-efficiency Program aim to reduce the consumption of natural resources, raise awareness among its employees and reduce costs, as a matter of education, respect for the environment and concern for future generations.

The Smart Electricity Grid Program, the largest of its kind in Latin America, was born from a Copel pilot project in 2018, in Ipiranga, in Campos Gerais, covering five thousand consumer units in urban and rural areas of the municipality with great results.

In 2022, Copel started the installation of smart meters in seven other municipalities in the South-Central region of Paraná. An investment for technological replacement at no cost to the consumer and without burdening the energy bill, with cost reduction for the Company.

The deployment of sensors and remote control devices allows the power grid to turn itself on automatically. In cases where this eventually does not occur, the Company can detect and remedy eventual shutdown problems from the Integrated Distribution Operation Center, in Curitiba.

The project creates a connectivity infrastructure to other applications. Enabling immediate applications, such as, for example, implementation of network reconfiguration systems (self-healing) and automation of automatic reclosers or voltage regulators. Equipment that in real time is integrated to the CIDIS information systems, creating potential to integrate other services in the future, such as distributed microgeneration management, use of energy storage technologies, intelligent public lighting management, and electric vehicle supply management.

Together with the other investments in infrastructure, the intelligent operation actions help reduce energy losses and power supply interruptions, increasing the quality of services provided by Copel.

Copel, as an essential service provider, is responsible for the execution of various public policies aimed at improving the well-being of the population in its area of influence.

The Company’s guidelines are environmentally correct, socially fair and economically viable, respecting the applicable legislation and the commitments voluntarily undertaken, generating value for all stakeholders.

Copel is a pioneer in the management of environmental, social and corporate governance issues. Throughout its history, it has consolidated its position as a company committed to providing energy and solutions for the sustainable development of society, being the first company in the electric sector to adhere to the Global Compact of the United Nations – UN, on July 12, 2000.

Copel considers the expectations of stakeholders in its decisions and develops its business responsibly, always seeking alternatives that promote social welfare, aligned with legislation and international norms of behavior.

Occupational health and safety is present in Copel’s corporate strategy, specifically defined as one of the Company’s values. Based on this premise, it seeks to ensure a healthy work environment in which employees and managers collaborate in a process of continuous improvement in the protection and promotion of safety, health and well-being for all.

In this way, all employees and managers develop, along with their usual activities, a routine of care with safety, to ensure that no service is performed outside the existing procedures in the Company. This is reflected in the continuous improvement of the programs and processes related to this theme.

These programs aim to achieve the goal of Zero Fatal Accidents in the Company’s activities by 2023.

The principles that guide Copel’s Integrity actions are based on the Company’s values, on the Code of Conduct and on the Global Compact of the United Nations (UN).

The actions carried out by the responsible areas are compiled in the Integrity Program, whose purpose is the correct treatment of ethical and conduct deviations and mainly the implementation of anti-corruption measures.

As fundamental points for the good performance of the Program, the Code of Conduct and the Denouncement Channels are highlighted.

Copel, a publicly traded company, aligns its practices with the requirements established for companies listed on Level 2 of Governance of the B3 – Brasil, Bolsa, Balcão, complying with the provisions of Federal Laws 6,404/1976 and 13,303/2016, the rules of the Comissão de Valores Mobiliários (CVM) and other applicable legislation in Brazil.

Abroad, the Company complies with the rules of the Securities and Exchange Commission (SEC) and the New York Stock Exchange (NYSE), in the United States, in addition to complying with the Sarbanes-Oxley Act (maintenance of the internal controls environment); and in Spain, the LATIBEX rules of the Bolsa y Mercados Españoles.

Copel’s practice is the constant improvement of its Governance System, which goes beyond compliance with legal requirements, the regulations of the Securities and Exchange Commission of Brazil (CVM), the Issuers Regulation of the B3 and the practices imposed by the North American legislation for companies listed on the New York Stock Exchange.

Because it believes that sustainable companies add value and strengthen its brand, gaining conditions to better face eventual economic, social and environmental risks, Copel reaffirms that management for sustainability is the path capable of providing society, the environment and other stakeholders with the opportunity to enjoy, as partners, the Company’s growth and development.

Copel adopts as sustainability management tools the methodologies, standards, certification platforms and sustainability assessments that are references in the preparation of reports, structuring of processes and classification of best practices for growth with sustainability.

Seeking to be always up-to-date on ESG issues, Copel participates in several specific forums such as the United Nations Global Compact, the Brazilian Business Council for Sustainable Development (Cebds), the World Economic Forum, the Carbon Disclosure Project (CDP), among others.

Copel’s set of goals follows the guidelines of its Strategic Planning, with the list of goals unfolded from the strategic objectives, reaching the organizational structures vertically and horizontally, when pertinent, integrating the areas for joint achievement. The analysis of the targets by means of indicators allows the Company to establish levels of performance and desired results.

Copel performed the mapping of stakeholders based on the AA 1000 methodology. The criteria considered the degree of impact and influence (impacted, strongly impacted, impacting and focused on value). Thus the stakeholders were represented in the shaded areas of the illustration, according to their level of relationship with the organization. In addition to the environment, the publics considered priority are shareholders, customers, communities, competitors, employees, and suppliers.

The Company’s Materiality process is developed based on a survey and processing of data on issues relevant to Copel (Holding) and its wholly-owned subsidiaries, with the approval of the Board of Directors, whose result serves as support for the preparation of the Strategic Planning and the Integrated Report, and is therefore fundamental to the conduct of the Company’s business, in addition to considering the Sustainable Development Goals (SDGs). 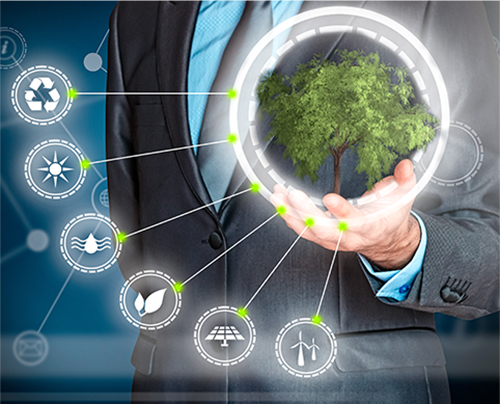 As a systemic process, Strategic Planning is carried out in an organization with the objective of guiding which is the best path or the best way to achieve pre-established goals, always aiming at the best scenario previously analyzed.

At Copel, the planning and business performance management area is responsible for coordinating these matters in an integrated manner between Copel Holding and the integral subsidiaries, as well as for defining guidelines for their unfolding.

Innovation, linked to Research and Development, is a material theme for the Company, whose initiatives are developed by several directorates, especially with regard to the culture of innovation.

Besides the culture, significant improvements are being implemented in the processes. We highlight, for example, the creation of the innovation sector within the Business Development Board, whose performance has promoted the insertion of the innovation theme as part of the Company’s Investment Policy concomitant with the creation of the Investment and Innovation Committee, with the objective of accelerating initiatives of interest to the Group. Thus, the Company now allocates a reserve of resources for investment in innovation projects, in addition to the resources traditionally already allocated to Aneel’s regulated R&D program.

Copel has adopted the Sustainable Development Goals (SDGs) structure as one of its main Sustainability guidelines. The launch of Agenda 2030 (UN) in 2015 was a milestone for sustainable development on a global scale: 17 impressive goals split into 169 goals, which must be adapted to local contexts.

With the motto “leave no one behind”, the mission of the SDGs is to leverage the commitment of the various actors (nations, governments, industries, companies, academia, among others) to a broad and participatory action. The implementation strategies are regionalized, considering specific characteristics and priority actions of each territory.

In the case of Copel, mainly in its area of operation, initiatives are developed in line with its strategy of generating value with

In 2018, as a product of the workshops of the “Energia & Clima” group of the Global Compact Network Brazil, the manual “Integration of SDGs in the Brazilian Electric Power Sector (SEB)” was published, which listed the five most relevant SDGs for companies in the electricity sector, whose prioritization was also adopted by Copel:

These SDGs permeate the ESG pillars: